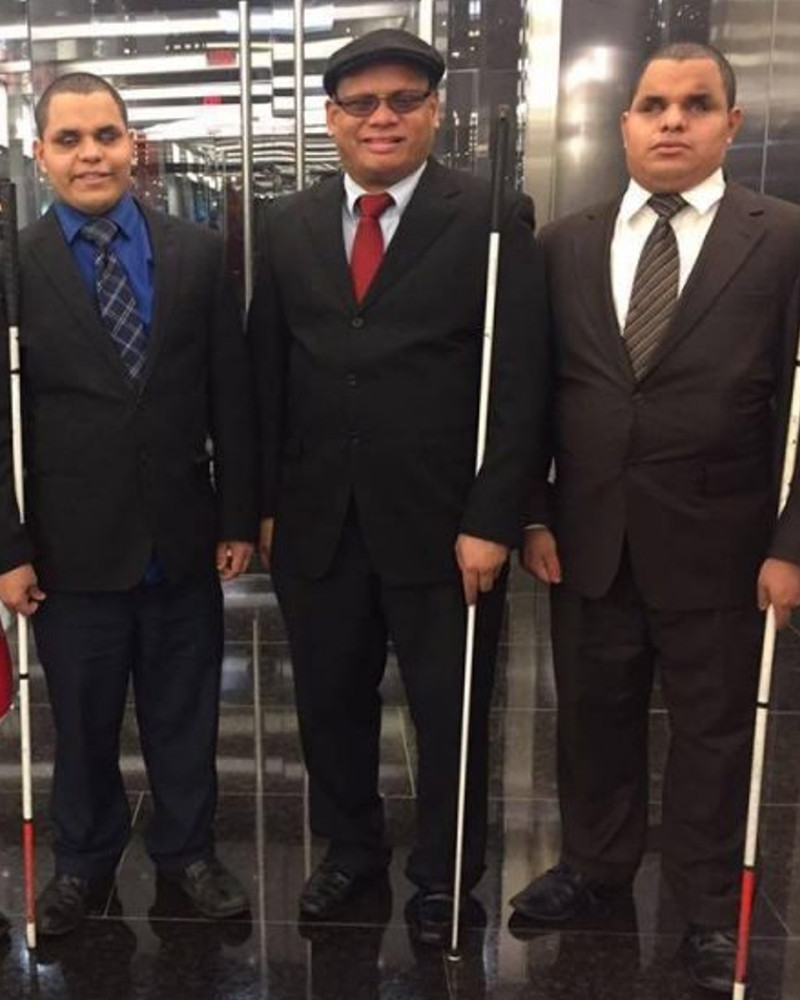 We are proud to induct Ollie Cantos into the Susan Daniels Disability Mentoring Hall of Fame.

Ollie Cantos as a blind Filipino-American has defied the odds — in more ways than one. Having become blind as the result of medical complications at birth, Ollie was the object of bullying and taunts as a little boy with no self-confidence. He eventually came to defy conventional thinking by rising in prominence at one point to becoming the highest-ranking person with a disability in the United States federal government.

As a tireless champion for legal services to low-income persons, Ollie served as Board Member and eventually as Vice President of the Legal Aid Foundation of Los Angeles, one of the largest providers of legal services in the nation. He also served as an appointee of the Board of Governors of the State Bar of California to its Standing Committee on the Delivery of Legal Services.

Within a disability context, Ollie got his start at age. 20, holding positions of responsibility at the local, state, and national level within the National Federation of the Blind. Subsequently moving into the cross-disability arena and in spite of significant obstacles, he became a civil rights attorney and worked at the Disability Rights Legal Center in Los Angeles. Following a three-year term there, he was recruited to relocate to Washington DC to become General Counsel and Director of Programs for the now-130,000-member American Association of People with Disabilities. That led to him serving as a leader in the Civil Rights Division of the U.S. Department of Justice as Special Assistant and later Special Counsel to the Assistant Attorney General. Ollie was then appointed for two terms of service as Associate Director of the Domestic Policy Council at the White House under President George W. Bush. Ollie subsequently returned to the Justice Department, accepting an appointment at age 37 to serve as Vice-Chairman of the President’s Committee for People with Intellectual Disabilities.

Today, Ollie continues his public service under President Donald J. Trump as Special Assistant to the Assistant Secretary for Civil Rights at the U.S. Department of Education. Here, his work has expanded to address a broader portfolio beyond disability issues alone.

But, Ollie’s work spans far beyond his leadership in the public arena. He has served as a long-time attorney mentor for the American Bar Association Commission on Mental and Physical Disability Law and was once a member of the Commission as well. For almost 20 years, he has been a Big Brother mentor to a kid who was once in a Los Angeles-based program, who has since grown to adulthood, and who has just honorably completed six years of military service as an airman with the United States Air Force. In addition, Ollie has mentored African-American foster children living in Washington, DC while serving on the board of a local non-profit organization providing social services to the local Latino low-income community. Also, Ollie was Academic Advisory Board Member to a group once known as LeadAmerica, a national youth leadership development organization dedicated to teaching thousands of junior high school and high school students principles from within the personal development space. Ollie has also spent years on disability-related issues including assistive technology, civil rights, criminal justice, emergency preparedness, employment, entrepreneurship, parenting, special education, transportation, veterans’ issues, and independent living.

Loving to have fun ice skating, rollerblading , horseback riding, and other activities, Ollie is a three-time finisher of the 26.2-mile Los Angeles Marathon. He is also past Board Member of the Blind Children’s Center in Los Angeles, the ENDependence Center of Northern Virginia, and the Westside Center for Independent Living. In addition, with a uniformed equivalent rank of Lieutenant Commander, he was the first blind person in history to serve as “District Staff Officer – Legal Parliamentarian” in the United States Coast Guard Auxiliary.

Ollie is also a business entrepreneur. He is President and CEO of Prosperity International, LLC, a for- profit company aimed at teaching and arming individuals and organizations with tools and techniques for enhancing branding, visibility, marketability, and spheres of influence.

Ollie has been featured on radio and television and in newspapers and magazines and once received an honor from the President of the Republic of the Philippines before a broadcasting audience of 80 million. Over his lifetime thus far, Ollie has spoken directly to audiences in 42 states totaling more than 58,000 individuals and counting. In addition, he has contributed online content via blogging and videos on YouTube. He has received prominent mention on social media by six-figure and seven- figure income earners as a shining example of a successful and well-rounded person with a “no excuses” attitude.

Building on the bedrock of support, especially from his parents and sister, at the center of Ollie’s life are three blind triplet boys — Leo, Nick, and Steven. Starting off as their mentor as recruited by a local social services agency when they were just 10 years old back in 2010, they now call him Dad and themselves have since gone on to thrive well. Before even turning 18, the boys each qualified for the rank of Eagle Scout in Boy Scouts of America (with final approval pending), have spoken to audiences totaling in the thousands, have gotten to spend quality time with those who have become highly-successful in business and government leadership, have received media coverage collectively reaching more than 53 million, have been recipients of scholastic grants several times, and more. Among the three, areas of involvement have included athletics; church and community service; the school newspaper; and one of them serving as Student Body Secretary, being the first totally blind student in U.S. history ever to serve as Drum Major to lead a large high school marching band, and mentoring elementary school kids. Two have each worked as paid interns for separate South Korean technology companies and within the non-profit sector, and one is working as part of AmeriCorps this Summer. Having recently graduated from high school, all three are presently working full-time in paid capacities, will begin specialized independent skills training in the Fall, and will be attending four-year colleges afterwards with two wanting to become attorneys and the third aspiring to work in business.