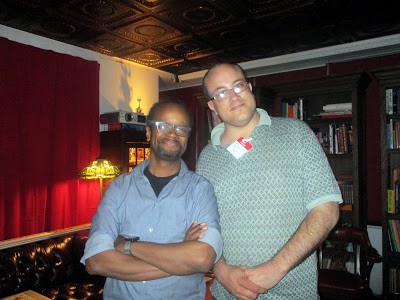 This is a guest post written by Alec Frazier and Autistic Reality.

Today I would like to talk to you about mentors! Throughout my many business endeavors, I have gained a few mentors. The title of mentor is not something that I give away lightly. Out of my hundreds of professional contacts, I would say that I only have four mentors. They are Mat McCollough, Joyce Bender, Emil Novak, Sr., and Jd Michaels.

Mat McCollough was assigned to me as a mentor in 2011 by the American Association of People with Disabilities (AAPD), the nation’s largest cross disability rights network. I was serving as an intern through them at the time. Mat was the Executive Director of the Developmental Disabilities Council for the District of Columbia when I met him. He has since become the Acting Director of the District of Columbia’s Office on Disability Rights. He is also a presidentially-appointed member of the US ACCESS Board, the United States government agency which deals with physical access matters mandated by federal legislation. He met with me frequently during my internship, invited me to functions, spent some down time with me, and has met with me since then. When I was in Washington for the 25th anniversary of the ADA, I met with him to discuss an eventual move to the Washington, DC area. He was very forthcoming about tips for gaining employment, for which I am most thankful. Since I have moved to the Washington, DC area, Mat has continued being a professional contact, and also a very dear friend.

[Editor’s note: Mat McCoullough was inducted into the Susan M Daniels Disability Mentoring Hall of Fame in the Class of 2016 after Alec submitted a public nomination. The impact Mat has had on Alec and countless others is to be recognized and applauded!]

I met Joyce Bender on the very first day of my internship for the AAPD. She was just about to assume the role of Board Chair of that organization. I will admit that I did not know much about who she was until part way through the internship. I soon learned that she has done more for disability employment than almost anyone alive today. She runs an agency, Bender Consulting, out of Pittsburgh, Pennsylvania. She has helped develop policies that are now implemented on the federal level, and she frequently meets with delegations from overseas who are hoping to improve their disability employment measures. Joyce has always been willing to provide job recommendations, references, networking, and other opportunities. When I last met Joyce, she gave me a gigantic hug and repeatedly referred to me as “my son.” I feel honored to have someone of her stature in my corner, and it is absolutely incredible how close we have become!

“Alec served as an intern for the American Association of People with Disabilities in 2011. As the Chair of the Board, I was very impressed with his intellect, professionalism, and passion. He is a bright young man with a great desire to give back. I would endorse him”
– Joyce Bender, Founder & CEO, Bender Consulting

[Editor’s Note: Joyce Bender was inducted as part of the inaugural Class of 2015 into the Susan M Daniels Disability Mentoring Hall of Fame. Her impact through mentorship for youth and adults with disabilities is again reinforced, this time by Alec’s testimonial.]

Emil Novak, Sr. is a successful independent businessman in Buffalo, New York. He approaches life with common sense, and always jumps at opportunity. He has been working at the biggest comic book store in town, Queen City Bookstore, since his father founded the business over forty years ago. He is now the owner of the business, which is the oldest bookstore in Erie County, New York. He also runs an independent film studio, two local comic book conventions, and manages Visions Comic Art Group, a local group that makes comic books and coordinates artists and writers. Emil has graciously allowed me to do publicity for him, honing my skills in photography, events management, and social networking. When I came out with a paper that I wanted published, I was told that there was no chance of that happening. Emil came forward and allowed me to get it published. He has also coordinated artwork for this publication, and allowed me to promote it at his conventions. Since moving away from Buffalo, New York, I have remained friends with Emil, while developing a new mentor-mentee relationship in Washington, DC.

In another blog post, I spoke of the benefits of the Lights, Camera, Access 2.0 seminar on disability and media. I have been invited to these seminars, both during the closing days of the Obama administration. At the first one, which actually took place at the White House Complex, I met Jd, who is the Executive Vice President of a large, prominent international advertising firm in New York City called BBDO Worldwide. Although we are not located in the same cities, we frequently meet over Skype. At one point, he proposed some rough deals to me. I later traveled to New York City to meet with him at his offices and discuss details. For one thing, I am being given a job at BBDO Worldwide as an editor. My job is to edit stories from authors in the Deaf and disability community for collection into an anthology. Editing includes work on flow and consistency of content, and monitoring disability-related themes. This job shall last at least one calendar year. In addition, based simply on the fact that Jd believes I am a good person, BBDO will be paying for the production of a book collecting a number of my essays. Amazingly, all profits will be mine. I am stoked! Finally, Jd will be working with me to find conferences and other events where I can be a guest speaker. It is clear to see that Jd Michaels is a terrific friend and mentor!

All of these wonderful people have contributed greatly to my success in my professional life. I thank them tremendously for all of the help and patience they have given me in helping to contribute to my professional growth.

I would like to extend my heartfelt thanks to Mat McCollough, Joyce Bender, Emil Novak, Sr., and Jd Michaels!

This blog posting is both the personal opinion of Alec Frazier, and the professional policy of his advocacy firm, Autistic Reality. The post was updated on September 17, 2017 and is being shared with the permission of the author.

About the Author: Alec Frazier is an autistic advocate and self advocate. He lives in Takoma Park, Maryland and works in Washington, DC. He has a bachelor’s in political science and a master’s in disability studies, both from the State University of New York at Buffalo (SUNY UB). In his spare time, he enjoys architecture, sightseeing, and photography. Contact Alec here.