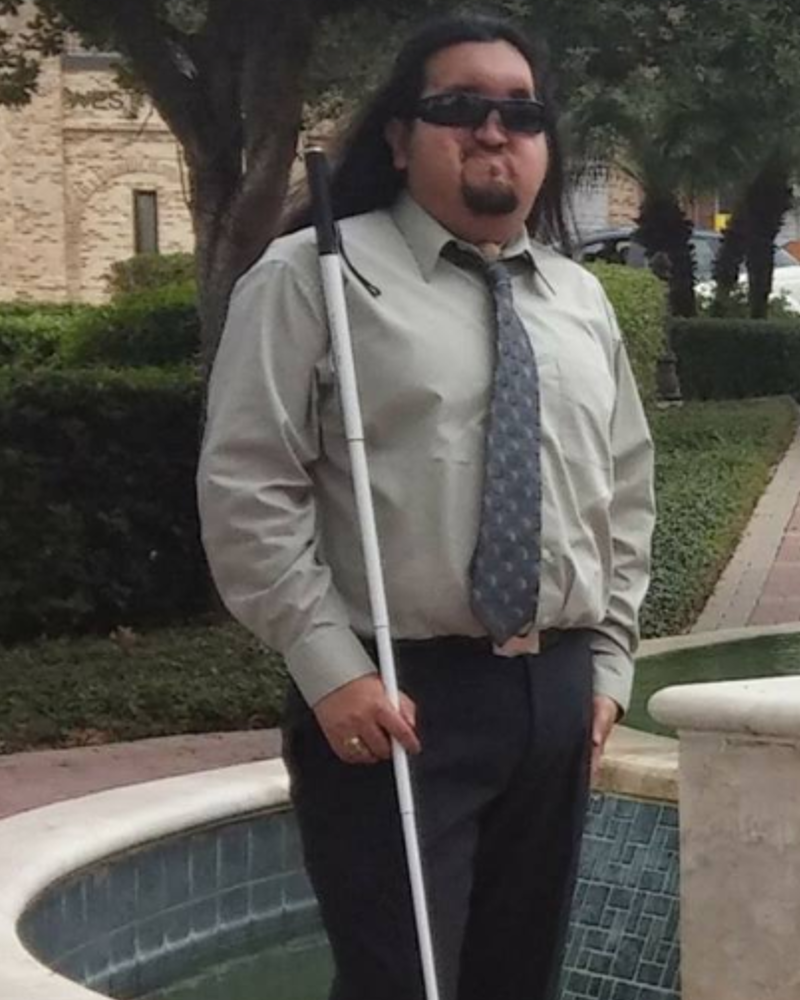 National Federation of the Blind (NFB)

“As a mentor, I believe that my responsibility is to support the personal growth of my protege. Mentoring is a way to lead by example, and to share the skills and confidence that I learned from my own mentors.”

We are proud to induct Daniel Martinez into the Susan Daniels Disability Mentoring Hall of Fame.

Daniel Martinez is a Blind Children’s Specialist and Mentor in the Rio Grande Valley of Texas who helps people with disabilities learn how to effectively advocate for themselves. He believes everyone has the potential to accomplish their own personal goals and live fulfilling lives. He defies society’s misconceptions and low expectations as he believes that disabilities do not stop people from being successful. He trusts that high expectations help challenge people with disabilities to push themselves a little further.

As a member of the National Federation of the Blind (NFB) since 2007, Daniel has served as a mentor to blind children, teens, and adults across Texas and beyond. He joined the Federation as a protégé in the NFB of Texas Mentoring Program, and became a mentor himself in 2015 to share the skills and confidence he gained with others.

Daniel holds several leadership positions. Currently he is a board member of the NFB of Texas, and Vice President of the Rio Grande Valley Chapter and the Texas Association of Blind Students. He has coordinated, instructed, and collaborated in programs such as the Texas Braille Enrichment for Learning and Literacy (BELL) Academy for blind children ages 3-12, NFB-NEWSLINE Texas Silver Bells Senior Training, and the Cambiando Vidas programs for blind Spanish speakers.

In May 2018, Daniel played a major role in coordinating a training weekend for 16 Spanish speaking blind south Texas residents and their family, sponsored by the NFB of Texas and METAS. He led the recruitment effort, coordinated logistics, and provided one-on-one mentorship to participants and family members at the Cambiando Vidas program. The program provided hands-on workshops in topics such as braille literacy, cane travel, adaptive technology, daily living skills and aids, and positive blindness philosophy.  Daniel was subsequently invited to join METAS at its Mexico 2018 weeklong instruction for students at the School for the Blind in Guadalajara to provide his expertise in the Spanish language, mentoring, and independent living training.

In early October of 2018, Daniel coordinated the Cambiando Vidas in Matamoros program, which provided hands-on workshops in blindness core skills to 19 Mexican families lacking community resources. While providing cane travel instruction, he observed how these blind participants with little or no resources embraced the positive philosophy imparted by the instructors. Many students expressed the sense of empowerment they gained after learning to walk independently with a long white cane during the weekend training.

Daniel is passionate about helping others, particularly those who are in need. He is currently enrolled at the University of Texas – Rio Grande Valley pursuing his graduate degree in Early Childhood Special Education to compliment his skillset and enable him to help an even broader spectrum of people with disabilities.

Daniel’s hobbies include playing guitar, accordion, and other musical instruments. He can often be found playing guitar at Sunday mass and rocking out at family parties at night.