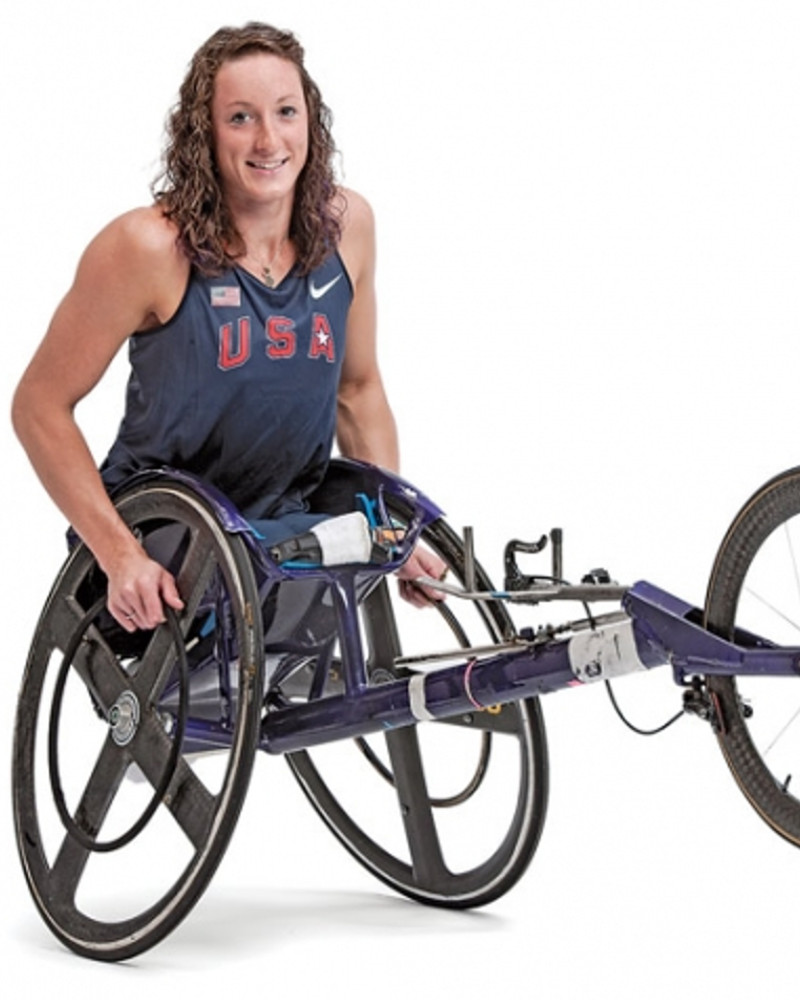 We are proud to induct Tatyana McFadden, athlete and author, into the Susan M. Daniels Disability Mentoring Hall of Fame’s 2015 inaugural class.

There are very few athletes in history who have come from so little to accomplish so much. Born with spina bifida, a hole in her spine, Tatyana McFadden spent the first six years of her life in a Russian orphanage with virtually nothing, not even a wheelchair. Paralyzed from the waist down, and with no other way to move, she learned to walk on her hands simply to keep up with the other children. Little did she know that the powerful arms and hands she began to develop as a small child would someday carry her around the globe as one of the world’s greatest athletes.

In 1994, Deborah McFadden, then Commissioner of Disabilities for the U.S. Department of Health, came upon Tatyana while visiting her orphanage on an otherwise routine business trip. She felt a connection, an inexplicable feeling that they were meant to be together. Deborah adopted Tatyana, brought her to the United States and gave her both a wheelchair and a new start on life.The transition was difficult and Tatyana’s health worsened so she was enrolled into various sports groups in hopes that it would build her strength. It did, and then some, and so began Tatyana’s extraordinary life as an athlete.

Tatyana tried every sport she could find; wheelchair basketball, swimming, ice hockey, and even scuba diving. From the start she fell in love with wheelchair racing –a sport through which her powerful arms immediately brought success. At 15, Tatyana made her Paralympic debut in Athens in 2004. She was the youngest member of Team USA. She returned from Greece with her first two medals and a hunger to become the best. Two years later she was, winning gold at the World Championships and setting a new World Record in the 100 meter event.

At the 2008 Paralympic in Beijing, at 19 and still in the infancy of her athletic career, she earned four more medals. In London, in 2012, she added another four medals, three of which were gold. One year later, at the 2013 World Championships, she became the first athlete in history to win six gold medals at the same competition. Her dominance was in full swing and she was still only 24.

Tatyana challenged herself with the professional marathon circuit in 2009, and with her win at the Chicago Marathon, she set off an extraordinary string of first place finishes that is still going strong. In 2013 she won the Chicago, London, Chicago and New York marathons, becoming the first man or woman, able-bodied or disabled, to win the Grand Slam (4 World Major Marathons in the same year) and then repeated her Grand Slam victory in 2014.

In 2015, Tatyana has already won both London and Boston and is poised to win the Grand Slam for a third year in a row. Always looking for a new challenge, and intrigued by the idea of returning to Russia to race, in 2013 Tatyana decided to give cross country ski racing a try in hopes of earning a spot on the Sochi Paralympic Team. With less than a year of on snow experience in her life, Tatyana made her winter Paralympic debut in Sochi and in a dramatic sprint to the finish line she narrowly missed yet another gold medal, settling for silver. It was first of what promises to be many more winter medals for Tatyana and the 11th Paralympic medal of her career.

McFadden had difficulty competing at high school. Atholton High School would not allow her to race at the same time as able-bodied runners, with officials saying her racing chair created a safety hazard and gave her an unfair advantage (as the best wheelchair racers are noticeably faster than runners over long distances). She could compete in separate wheelchair events at high school meets, which meant that she would circle around an otherwise empty track by herself, which embarrassed her.

In 2005 Tatyana and Deborah McFadden filed suit against the Howard County Public School System and won the right for her to race with her fellow classmates, with U. S. District Court Judge Andre Davis stating “She’s not suing for blue ribbons, gold ribbons or money — she just wants to be out there when everyone else is out there.” McFadden’s lawsuit is credited for the eventual passage of the Maryland Fitness and Athletics Equity for Students with Disabilities Act, requiring schools to give students with disabilities the opportunity to compete in interscholastic athletics.

Tatyana went on to press for federal legislation so that other students with disabilities across the USA would have equal access. In 2013 it was passed and now all students with disabilities will have opportunities to be involved with sports in school. She was also a leader of an ultimately unsuccessful effort against a 2012 Russian law to prohibit adoptions of Russian children by American parents.

In 2014 Tatyana graduated from the University of Illinois with a degree in Human Development and Family Studies and is returning to U. of I. to pursue graduate work in Education. When she isn’t racing or studying, she works as a national advocate for equal access for people with disabilities, is a lifetime member of the Girls Scouts, is on the Board of Directors of Spina Bifida of Illinois, and speaks to children and adults about healthy living.